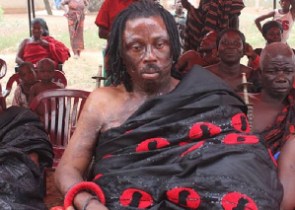 It was a tough time for famous traditional worshipper, Nana Kwaku Bonsam, on Tuesday morning when he appeared before the Asantehemaa Nana Ama Konadu’s traditional court at the Manhyia Palace, the seat of the Ashanti Kingdom.

This was when the Akomadan-Afrancho based fetish priest appeared before the court to answer why he invoked curses on the Member of Parliament (MP) for Offinso North Constituency, Augustine Collins Ntim.

The invocation of curses in the Golden Kingdom has been banned by Manhyia, but the dreaded traditionalist defied the order and rained curses on the MP, who happens to be a Deputy Minister of Local Government and Rural Development.

Nana Kwaku Bonsam caused the power of six deities, both local and foreign to deal ruthlessly with any voter who gets transported to the Offinso North constituency to vote in the parliamentary polls on December 7.

The ‘Kofi oo Kofi’ worshipper is contesting the Offinso North constituency in the upcoming elections as an independent candidate.

He had a firm conviction that his contender Mr Ntim, during the registration and transfer of vote exercises, bussed people who are not voters in the constituency to partake in the exercise.

Realising that the move will go against him on the election day, the dreaded traditional worshipper, took the infamous action to stop it.

At the hearing on Tuesday, the court asked the fetish priest if he was guilty of the offence or not.

In his response, he admitted his guilt and thereafter pleaded the court to allow a peaceful resolution of the matter.

Accepting his plea, the chiefs took turns to scold Nana Kwaku Bonsam, for his action, describing it as an affront to Asante tradition.

They were unhappy that a prominent fetish priest of his calibre, will stoop so low to denigrate Asante tradition with such awful behaviour.

Subsequently, he was sentenced to series of fines, running into several thousands of Ghana cedis and a full-blown sheep with horns to pacify the gods and also reverse the curse.

The chiefs made it clear to him that but for his status and his prompt admittance of guilt, he would have been made to present four traditionally adored sheep for the pacification and revocation of the curse.

He was, however, warned not to repeat such untraditional action because the consequences on him will be severe the next time.

Whereas Nana Kwaku Bonsam was there in person for the hearing, Mr Ntim was represented by party executives, who had a power of attorney letter to represent the MP due to his tight schedules.

AK Songstress Not Happy With The Media