Prof. Jane Naana Opoku Agyeman, running mate for the opposition National Democratic Congress (NDC) has adopted the triplets detained at Ajumako Bisease Polyclinic over the inability of their mother to pay hospital bills.

An amount of GHC5,000 was also donated to the mom to do business in order to allow her to temporarily cater for herself.

The 23-year-old Comfort Gyasie, who bore triplets (3 boys) at Ajumako Bisease a few days ago, told Kasapa News Yaw Boagyan that when the doctor told her she was pregnant she cried bitterly because of the kind of misery she was in.

She added that she was only going to the hospital with three baby dresses to welcome her.

The mother who was breastfeeding thanked running mate and Hon. Ato Forson has added that she least expected such compassion for the donations.

Dr. Justice Akofi Harrison of Bisease Polycyclic confirmed that the lady had been referred from one of the CHPS compounds in a village named Obrawogum and it was found after a scan that she was pregnant with triplets.

She was then told to come back and train but never turned up. The hospital sent a nurse on Wednesday to carry her out of the village and the situation was troubling when she came so she was rushed to the theater for delivery.
Dr Akofi Harrison, the prosecutor, thanked Hon. For their good gesture, Ato Forson and Prof. Jane Naana Opoku Agyeman 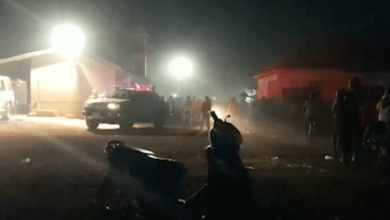